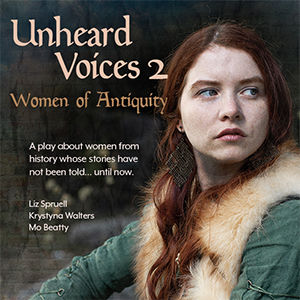 THIS SHOW IS NOW STREAMING ON-DEMAND!

Please go to this link to rent and view:


The video will be available until April 11th. Once you start viewing, you will have 72 hrs to complete.

Unheard Voices is a series of monologue plays about women in history whose names are known but whose stories have not been told. The first series was produced in 2018 and included Betsey Ross and Sally Hemings. This second series features Eve from The Book of Genesis. A woman wakes up an a garden, fully grown. Soon she meets a man who tells her she was made from his rib to be his helpmeet. Another character is Helen of Troy, who appears as an incidental character in many Greek myths and now tells the story of the Trojan War from her perspective. Finally, Pope Joan, a legendary woman of the Middle Ages, who disguised herself as a man to enter a monastery to have access to books and education and eventually became The Pope.